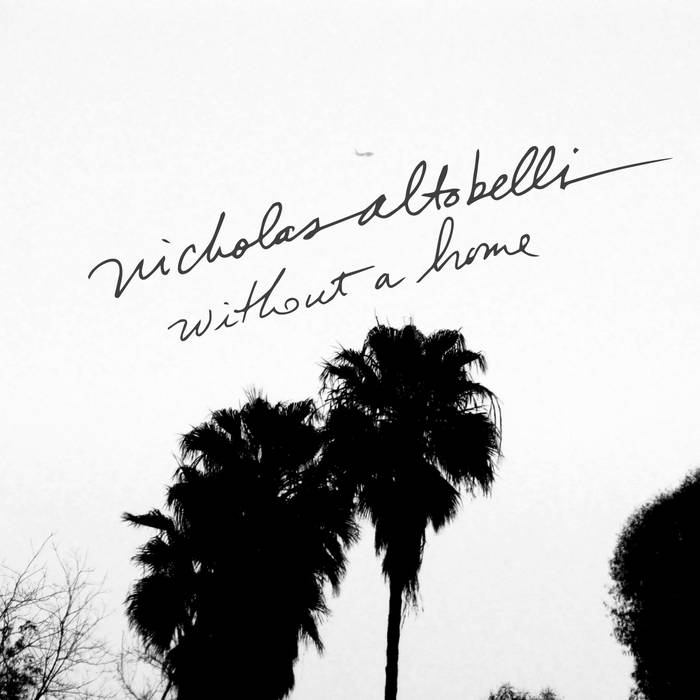 Nicholas Altobelli was born in Southern California and moved to Dallas, Texas in the middle of the fourth grade. Shortly after graduating, Nicholas picked up the guitar and taught himself country songs that were on the radio. In college he took a songwriting course and soon realized what he wanted to do in his life. He left college in 2007 and began pursuing music full time.

Between 2008 and 2011 he released three folk albums ('Waiting for the Flowers to Bloom,' 'The Regulator' and 'Radio Waves and Telephone Wire)' on his own Dalton Records, earning praise from the local press. Including a nomination for Solo Act of the Year by the Dallas Observer and declaring that Altobelli would “make fans of Leonard Cohen proud…”

In the fall of 2011, Nicholas began writing what he thought would be 'Without a Home.' After an initial tracking session in January of 2012, he realized he needed a change in musical direction.

“It was all wrong. Something didn’t feel right.” Altobelli recalls. “These were the wrong songs. I had to go back and start over even though I was halfway finished with an album. It was a tough decision but I had to do it.”

He began to rewrite the album but writer’s block turned weeks into months. It wasn’t until he had a meeting with Dallas songwriter and producer, Salim Nourallah (Old 97’s, Rhett Miller), that he was able to move forward. In a few short weeks, Without a Home was written.
Nourallah recruited an all-star line-up of Dallas musicians for the sessions. John Dufilho (Apples in Stereo, Deathray Davies) on drums, Joe Reyes (Grammy winner) on electric guitar, Becky Middleton (Ishi) on keys and vocals and Paul Slavens (KXT Radio) on accordion (I Just Want to Feel Real).

Musically and lyrically, Without a Home is inspired by two different subjects. The music was influenced by Altobelli’s home state of California

“Southern California has some kind of magic to it.” Altobelli says. “Especially Los Angeles, where dreams are killed with each heart beat but the people still come. We wanted this album to sound like something you would listen to while stuck in traffic on The 405 on your way to another failed casting call.”

Lyrically, however, the ten tracks are inspired by a deep depression and a recently diagnosed, crippling, anxiety disorder that almost ended Altobelli's music career.

“Most of these songs were written in full fledged panic attacks and endless depths of depression. It was the
only way to deal with it at the time and these songs are snapshots of those events.” Altobelli explains.

Without a Home is a departure from the acoustic folk of Altobelli’s earlier albums. Instead it is the work of a growing artist struggling with real problems and a good indication of what is to come from this talented young songwriter.

My name is Nicholas. I write sad songs.

Bandcamp Daily  your guide to the world of Bandcamp

Benji B talks about his new compilation ‘Deviation Classics’